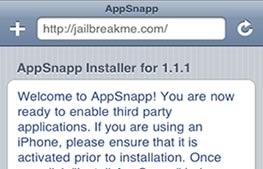 Gone are the days of manual jailbreaks and sitting there waiting a whole ten minutes for iJailbreak to do its stuff. Enter AppSnapp, now you can jailbreak your iPhone or touch without a computer!

Directions after the jump…

Point your Mobile Safari to Jailbreakme.com to get the party started.

After it loads, read the directions, scroll down, and tap “Install AppSnapp”. Safari should disappears and you should find yourself at the home screen. Give it a minute or two for your unit to restart don’t do anything until you see the slide to unlock screen. Once you get to slide-to-unlock, go ahead and unlock your iPhone or iPod touch.

Users are reporting a higher success rate when using their Wifi connection over their EDGE on their iPhones.