Pro Zombie Soccer. I gotta admit, I downloaded it because it was about zombies. I don’t know what it is, but something about zombies just makes games better it seems. The problem is that the market is getting flooded with crappy zombie games, making those that are actually worth your money have to work so much harder to get your attention. Whatever the case if you can accept the premise that someone is better fit to kill zombies because he has such amazing soccer skills… then this game just might be for you. 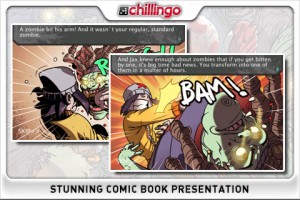 So I already told you the premise of this game is the fact that our hero possesses elite soccer skills, and that’s what makes him fit to be our zombie-slayer du jour… and you still clicked through to read the rest of the article, welcome! Let me start by giving this game the recognition it deserves, it knows it’s a silly premise, and it doesn’t hide that fact. The storyline is delivered to us via really nice comic book style panels. The dialog, well, I could have written the dialog, so that can either be a good thing or a bad thing. I got a kick out of a few of the story turns, simply because of the way it was written. 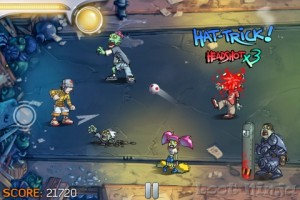 The game play is simple. I think you could probably play this game with 1 hand, freeing you to do monotonous chores with the other… you know, stuff like driving and nonsense like that (Please don’t actually try to play this game and drive at the same time, if you didn’t realize that that was a joke, you shouldn’t be reading my blog posts. 10 & 2 people! 10 & 2!). All you have do is move the little circle, on the left side of the screen behind your character, up and down to point the arrow at the oncoming zombie horde. The longer you hold that circle, the harder you kick the ball. Seems easy enough right?

As is always the case with games like this, you gain better skills to use against the zombies the farther you get into the game, and of course, the zombies get harder and harder to kill as the game moves along, requiring you to use those fancy shmancy new skills you recently obtained. 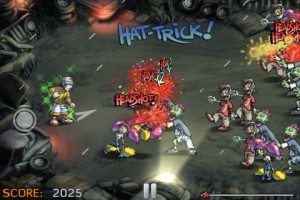 You start out with a ‘lightning’ ball that flies really fast, allowing you to kick it faster and faster, this is the crappy power-up that you won’t use anymore once you get better ones. Soon after, you get a ‘slice’ ball that goes through pretty much anything. This is my favorite power up, it doesn’t quite pack the biggest punch, but you can get a few kicks out of it, easily clearing the entire screen every time. The last one is a ‘satellite’ ball, which actually triggers a satellite that shoots giant (puts his fingers into the air forming quotations and mimics Dr. Evil)  lasers. After using this power-up, you use the iGyroscope, or whatever the cool kids are calling it these days, and tilt the iPod back and forth so that the aimer gets all the zombies.

I don’t see this being the type of game I’ll keep coming back to time after time, but it’s at least fun for a single play through. With that in mind: