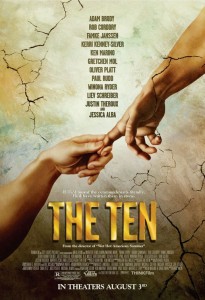 I remember hearing about The Ten when it came out in 2007, and I was interested in it purely based on all the names in it, but I withheld some of my enthusiasm as the entire movie is basically comprised of making fun of the Ten Commandments. I really like Paul Rudd, even in the movies I disliked, I typically enjoyed the scenes he was in. You might say I have a ‘movie crush’ on him, sometimes I’ll watch a movie only because he’s in it. I’m looking at you Wet Hot American Summer, although to be fair, I also watched that one because Elizabeth Banks is in it. I’ve also got a ‘movie crush’ on her and watch some of her movies simply because she was in them. Hmm… ‘movie crushes’, sounds like a possible upcoming post!

Alright, time to find my way back from that rabbit trail… so my wife had a girls night, and I stumbled across Cinematicals Free Flick of the Day and it featured The Ten. So I headed over and found it on Hulu, put it on the big screen (connected to my Media PC custom made by Nelsen Technologies) and found out what this movie was about.

The premise of The Ten, released in theaters on August 3, 2007 and on DVD January 15, 2008, is simple, Paul Rudd hosts 10 viginettes, all of them based on the 10 different commandments. All of these short clips are loosely connected, and they are all extremely outlandish takes on breaking these rules. A few of these are pretty funny, a few are just plain wrong, and a few totally miss the mark. If you watch movies for funny lines, like me, you’ll probably get a few laughs out of this movie. If you watch movies for the experience or the quality of the story, this movie is NOT for you.

Here’s the quick rundown of each story, courtesy of Wikipedia:

Ten stories, each inspired by one of the Ten Commandments:
1 “Thou Shalt Worship No God Before Me”
A guy (Adam Brody) becomes a celebrity after falling out of a plane and becoming permanently embedded in the ground. After a swift rise to stardom, he becomes prideful and arrogant, referring to himself as a god. His career falls apart and he loses everything. His fiance (Winona Ryder) leaves him for a TV anchor man.
2 “Thou Shalt Not Take the Lord’s Name in Vain”
A librarian (Gretchen Mol) has a sexual awakening in Mexico with a swarthy local (Justin Theroux) who turns out to be Jesus Christ. She eventually settles down and marries her coworker (A. D. Miles), but is secretly reminded of her fling with Jesus whenever her family prays before a meal.
3 “Thou Shalt Not Murder”
A doctor (Ken Marino) kills his patient by leaving a pair of scissors inside her abdomen during surgery. Despite expecting the charges to be dropped because he left the scissors in “as a goof”, the judge and jury sentence him to life in prison. The judge also disbars his lawyer, who is then told that he should consider a job as a tour guide at the local nuclear plant.
4 “Honor Thy Mother and Thy Father”
A white mother (Kerri Kenney-Silver) enlists an Arnold Schwarzenegger impersonator (Oliver Platt) to be a father figure to her black children after telling them he is their biological father. It is revealed that their father is in reality Arsenio Hall, but they decide to keep the Arnold impersonator as part of the family; despite not being able to imitate Arsenio, he can do a pretty good Eddie Murphy impression.
5 “Thou Shalt Not Covet Thy Neighbor’s Goods”
A police detective (Liev Schreiber) covets his neighbor’s CAT Scan machine. After continuously buying additional CAT Scan machines to one up each other, both of their wives leave them. After hitting rock bottom, the two neighbors reconcile and go out for a drink. Meanwhile, a disaster at a nuclear powerplant during a school tour (led by the former lawyer from the third story) leaves a busload of school children in need of several CAT Scan machines. They arrive at the neighbors’ houses but the doors are locked and the two men are at the bar, so all the children die.
6 “Thou Shalt Not Covet Thy Neighbor’s Wife”
A prisoner (Rob Corddry) desires a fellow inmate’s “bitch” (the doctor from the third story) for his own.
7 “Thou Shalt Not Steal”
The woman (Winona Ryder) from the first story, having recently married the TV anchor man, falls in love with a ventriloquist‘s puppet, steals it and runs off to have a romantic relationship with it.
8 “Thou Shalt Not Bear False Witness”
The ventriloquist, having lost his dummy and become a homeless heroin addict, is told by another homeless man a story about an animated rhinoceros (voice of H. Jon Benjamin) who earns a reputation as a liar. After learning that a band of weiner dogs is intent on infecting others with a fatal STD, the rhinoceros tries to warn everyone. Unfortunately, nobody believes him, and they all succumb to the STD (following an orgy) and die. It is then revealed that the rhinoceros now sells drugs to the homeless men.
9 “Thou Shalt Not Commit Adultery”
Jeff Reigert (Paul Rudd) presents all of these stories to the audience, while struggling with his own moral dilemma: having to choose between his beautiful wife (Famke Janssen) and his also beautiful but somewhat younger mistress (Jessica Alba).
10 “Remember the Sabbath and Keep It Holy”
The husband from the second story (A.D. Miles) skips church with his family to get naked with his friends and listen to Roberta Flack.

I laughed mostly at the last story because my buddy, Bob Sacamano, and I used to joke about having Naked Saturdays… although I can’t imagine they would have turned out the same way (then again, why am I imagining that at all?). All in all, it was amusing watching all of these big names do all this crazy stuff, but you really aren’t missing anything if you skip this one.

Dave’s Quick Hits: It had a few good lines, and I knew going into it that it had to be terrible, just based on the premise, so I shouldn’t have been surprised, 3 out of 10.
Thoughts From The Better Half: Guys night… she was out with the ladies so nothing to chime in on this one.
Rotten Tomatoes Score: 37% – Although a few of the sketches that make up The Ten are humorous, the uneven and random tone of the film cause it to fall apart.