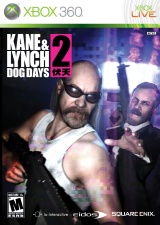 The other truth I have to lay on you is this, I never played the original Kane & Lynch game. I walked into Blockbuster with the knowledge that that original game sparked talks of an upcoming movie, and apparently was good enough for a sequel, so I grabbed a copy and gave it a try. Simply put, it’s not worth your time. For a bit more in depth reason as to why, join me after the jump.

I have to a little bit of credit to the game before I downgrade Kane & Lynch 2. The presentation is fantastic. They give you some of the story during the buffering screens, instead of making you sit there watching a loading screen, which is great. The game is also ‘filmed’ via handheld camera, so it feels like you’re running around watching these guys create massive amounts of havoc and mayhem. The overall storyline (as far as I got anyway) was even pretty well detailed and engrossing, you actually find yourself caring about these two incredibly screwed up individuals. It’s these types of games, even when they aren’t done as well as they could’ve been, that do end up making decent movies. It’s not usually an original story, but it has enough variation to grab you and make you want to find out more. 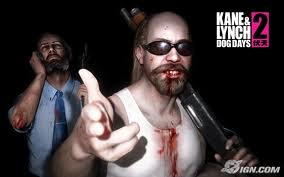 That’s about all the high praises I can give though for the game. From what I’m reading, the story mode only lasts about 4 hours, which is one of the big reasons the game isn’t worth purchasing. I really didn’t like the controls for this game either. The mechanics to finding new weapons weren’t good, the overall control (sprinting, hurdling objects, finding cover) just seemed clunky, and at times it was difficult to even find the guys who were shooting at you. A number of times I’d be chasing a guy or running around a corner and I’d be dead before the camera even rotated to show me who was there for me to avoid or take down.

A big reason it was so hard to locate the guys at times could have been the TV I was using. I didn’t play this game in full HD, I was on the 720 TV in my bedroom (that’s what happens when you are on baby patrol for the day!) but the graphics during the game seemed very lackluster, almost back to original Xbox days. The movie portions are nice, but the graphics during gameplay are just not good.

I’m still looking for a buddy to play these games with online (if you’re interested in contributing to Hijinks by way of playing games with me online, hit me up on twitter, I’d really appreciate it, although, you’ll have to pay for your own Blockbuster gamepass… just like me!), so I didn’t get a chance to try out what the game offers online or in multiplayer. Here’s what IGN has to say about those modes, it doesn’t sound like I missed much:

And then there’s multiplayer, and its cousin Arcade mode. Multiplayer is broken down into three modes: The returning Fragile Alliance, and a pair of variations on the theme, Undercover Cop and Cops & Robbers. Fragile Alliance partners you with other players on a heist on a strict timetable. You’ve got four minutes to get in and out alive with as much money as you can collect, but there’s a wrinkle; any player can betray the other players, collecting more cash. Of course, the payoff might be bigger working together, and traitors face the wrath of other players and enemy AI alike. Undercover Cop randomly assigns a Serpico amidst the expat thieves, who’s goal is to stop the other players once the heist is in motion. Cops and Robbers divides players into opposing teams, with Robbers attempting to pull off a score and escape and Cops attempting to stop them. Arcade mode takes the multiplayer modes and fills them with bots. While multiplayer’s concepts are strong and interesting, they rely even more heavily on the shooting and cover aspect of Kane & Lynch 2 than single-player. It’s nice that they’re there, and fun can be had, but the online aspect fails to lift above its humble underpinnings. There is online co-op this time around though.

Overall, I’d have to say Kane & Lynch 2 is a game with a lot of promise, great presentation and a good story, but just fails to deliver on it’s lofty aspirations.