We’ll cover the rest of the shenanigans after the jump. END_OF_DOCUMENT_TOKEN_TO_BE_REPLACED

The next few years will bring us the possibility of some of the greatest Superhero movies of all time, or it will all be an enormous letdown. Whether they turn out to be successes or flops, we’ll have to wait and see, but with all of them coming out within 2 years of each other, this leads to many rumors and possibilities floating around. So this is an exciting time for fans of these franchises. Comic-Con just wrapped up, so LOTS of details are being released about all these movies, so we have plenty to cover, let’s not waste anymore time. 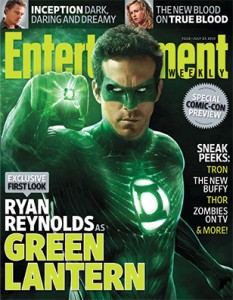 We’ve got our first look at Ryan Reynolds as Green Lantern! Cinematical says:

One of the more interesting things about Reynolds and this Green Lantern costume is that the entire get-up is being created with computers and placed on Reynolds after the fact. If you’ve seen images of Reynolds on set, the guy is covered in all sorts of dots and whatnot (see an image here) so that they can work their movie magic in post-production and provide the guy with his magic superhero suit. Will this help or hurt the production in the end? That we don’t know … yet.

I just don’t really get into the Green Lantern as a character, seems like one of the dumber superheros to me. The guy just puts on a ring and can become things… I guess it’s not the lamest idea for a super dude, but it doesn’t trip my trigger. I love Ryan Reynolds though, so I’m looking forward to the movie anyway. Some great tidbits about the movie after the jump with possible spoilers, plus info on Superman, Batman, Captain America… and more.

END_OF_DOCUMENT_TOKEN_TO_BE_REPLACED

I’ve been back here at Hijinks for just under a month, I’ve brought you The MMA Minute, T.W.I.S.T., Saturday’s Shenanigans, and helped to re-popularize (re-popularize? Is that even a word?) Hijinks Reviews of all sorts. It only makes sense that I’d squeeze in one more new ‘theme’.  I’m not sure anybody is actually reading these, but I’m still crankin’ them out regardless!

With that entry out of the way, welcome to Entry Level Geek. This title inadvertently describes the reason I’m here at Hijinks in the first place! Said nicely, I’m not at the same level of geekdom or nerdery as the rest of our terrific staff, you probably realized that after the first or second post I made. But they haven’t kicked me out yet, so I must trudge forward. Entry Level Geek will include an assortment of things but will probably center mostly around comics and maybe some rumors about upcoming movies based on comics (Avengers anyone? The next Batman flick?). I chose Entry Level Geek because I’ve just recently begun my trip into the world of comics, so I’m far from an expert, but I’m having fun taking it all in.

To find out what all this nonsense is about, follow me through the jump. END_OF_DOCUMENT_TOKEN_TO_BE_REPLACED