Pros: The weird looks your friends give you when you talk about what you’re doing in the game without telling them its just a game.
Cons: Buggy interface and no re-playability. Nothing cool to buy with our ill-begotten gains.

iDope is a port of the classic turn based strategy game, Dope Wars. Originally a high school project, in 1984 John Dell created a DOS based buying and selling stimulater based on drug trading. Almost twenty-five years later his concept has seen countless reiterations (including the wildly popular Facebook application–wildly popular because I swear I get ten invites for it every time I log on.) the latest of which comes to the iPod Touch and iPhone. Full review and screen shots after the jump.

If you’re unfamiliar with the game, the basic concept revolves around buying and selling various drugs in different parts of New York (Central Park, Ghetto, Bronx, Queens, and Brooklyn respectively). Every area of town has a different set of prices for each drug, which change incrementally every time you travel to another area. Keep track of the trends, buy cheap and sell high. 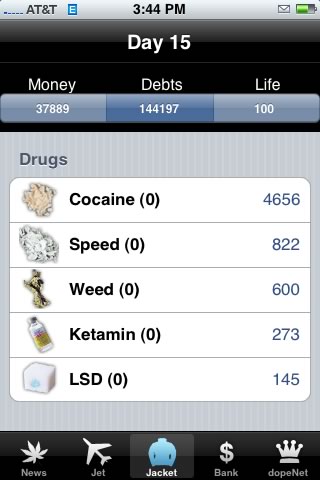 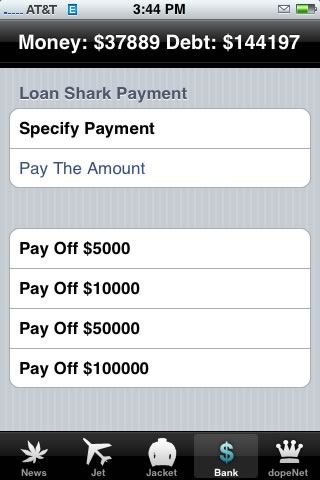 Pure capitalism would be too easy though, this is criminal life after all. In iDope you start with a $100000 debt to a loan shark, which compounds a 10% interest rate every time you travel to another area. Don Corleone would be proud. This mechanic brings in another element of gameplay: a heath bar. Your health goes down every time the bookies get impatient and come calling for payment, and when you get in a tussle with Johnny Law. The police play a duel role in the game, as you can either choose to fight (with the chance of fending them off at the cost of health), or escape (with a chance they will catch you and steal some of your stash). If you’re coming a little too close to your own mortality you can pay a premium to get your health back at the local hospital. 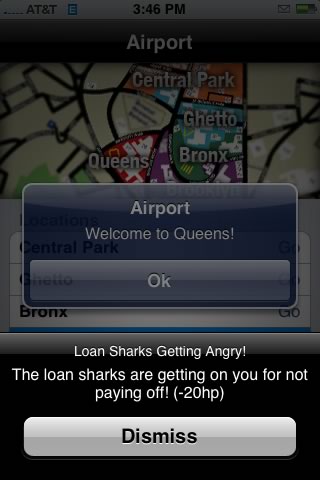 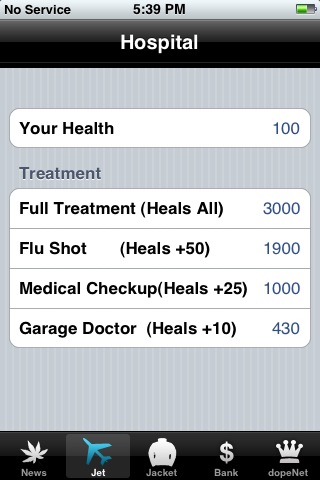 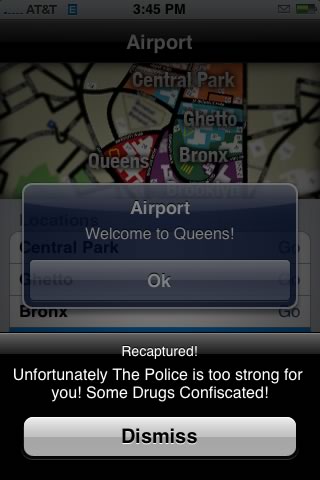 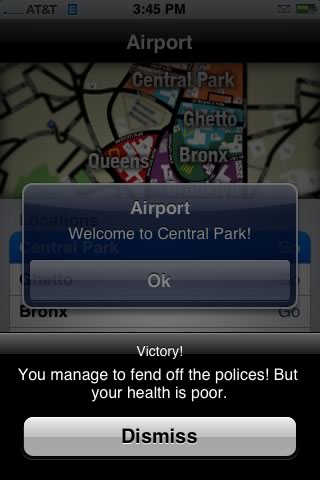 It’s hard to fend off the polices when The Police is too strong you. Bad grammar and random capitalization are the least of this game’s problems.

It takes a special type of game to make the transition to the touch screen interface smoothly, and the Dope Wars concept is a perfect fit, but iDope is not anywhere near a perfect execution. The developer creates a pretty solid interface, with minimal use of the on-screen keyboard. The biggest problem is the scroll wheel laden buy screen. Once you hit the buy, sell, buy all, or sell all buttons you have the option to pay off or dismiss the transaction. If you choose to dismiss it the buy/sell/buy all/sell all buttons will randomly cease to function until you back out of the jacket tab.
Another issue we ran into is specifying an exact payment to our lovable loan shark. When you select ‘Specify Payment’ a numerical keypad pops up. Once you enter the amount you desire push ‘Pay The Amount’ to complete the transaction. Simple right? Yes, but now you’re stuck with the keypad taking up 2/3s of the bank screen for the rest of the time you play. That’s right, there’s no back button, and no way to minimize it short of restarting the whole program.
These sound like programming oversights, which considering the presumable one-man dev team is understandable, but not forgivable.
The biggest shortcoming is the length. Once I figured out that I could make money faster then my loan’s interest rate it took me a little less then ten minutes to hit the cash cap ($2,147,483,647), and that’s pretty much the end of the game. The DopeNet tab is an online leader board, which might be a cool idea if there wasn’t a hard cap to how much money you could make. Other versions of Dope Wars have given you other things to spend your money on (i.e. Warehouses, tanks, etc), but this experience is sorely lacking in that area. 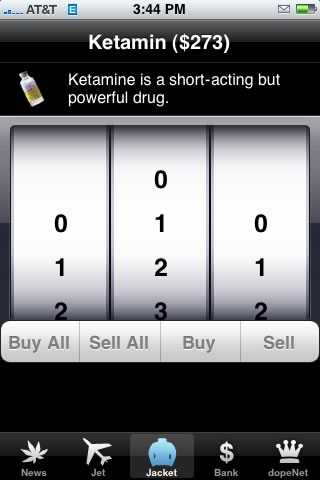 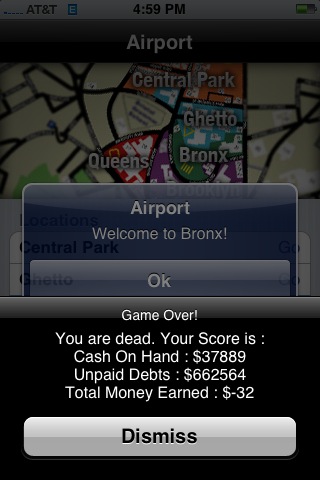 Bottom line: it’s free, fun while it lasts, and as fine a way to waste ten minutes as anything else currently on the iPod Touch and iPhone. Just don’t expect to play it more then once.

2 thoughts on “Hijinks Reviews: iDope. The Police is too strong for you!”