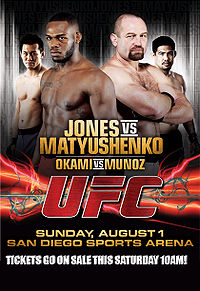 The page turns on the calendar tomorrow, and with that we leave the slowest month in recent memory (as far as the MMA world is concerned). August is the complete opposite, with a whopping 5 events to keep us occupied. We waste no time getting started as the first event is tomorrow, the first of the month, as the UFC brings us UFC Live 2: Jones vs. Matyushenko. The event will be the second UFC event to be broadcast on Versus; the first being UFC Live: Vera vs. Jones.

We’ve got a couple interesting things with this card, the least of which is the return of “Big” John McCarthy. He’ll referee this event, the first time he has refereed at a UFC event in almost 3 years. This will be Matyushenko’s 3rd fight since his return to the UFC, and Jones is a very dynamic opponent, especially compared to his previous 2 fights. I’m also curious about how the 2 wrestlers, Muñoz and Ellenberger, will fare in their matchups. With that said, let’s get to the picks:

As good as Matyushenko has been, Jones’ only setback was when he was disqualified for the use of multiple, illegal, 12-to-6 (striking from top of skull and down) elbows so I like Jones to continue to climb the ladder. I’ll also take Muñoz over Okami, Ellenberger over Howard, and Griffin over Gomi. 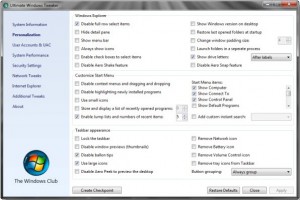 For those of you who used Tweak UI for the earlier version of Windows, here’s an application you’ll love that allows you to tweak most aspects of Windows Vista and 7.  It’s called Ultimate Windows Tweaker, and I found it to be very useful today while setting up a couple of Win 7 machines.

The 345KB application has a small footprint, and is contained entirely in the executable so no installation is necessary.  It also only displays options that pertain to the OS version your running it on.  Just fire it up, and over 150 customizable aspects of Windows are at your finger tips, no digging through countless steps to access them.

If you’re like me, and you want Windows to operate exactly as you want, not how Microsoft thinks you want it, you owe it to your self to download a copy and give it a try.

Here’s a little peak at the entertainment world now that Comic-Con has passed.

Shark Week starts tomorrow night on Discovery. My favorite quote about Shark Week is Tracy Morgan’s from 30 Rock when his character, Tracy Jordan, is teaching Kenneth how to live life to the fullest. “You need to live every week like it’s Shark Week.” There’s something about that that is so simple and yet, so true.

I guess Ellen Degeneres quit American Idol… if you care about that sort of thing. I hope that show dies a painful death, soon. END_OF_DOCUMENT_TOKEN_TO_BE_REPLACED

Hot on the heels of releasing Starcraft 2, the 12 year in the making sequel to Starcraft, Blizzard has announced that they will only make Starcraft 3 if you do the following*…

*Ok, so they might not have said that… Or even announced Starcraft 3 at all.

Apple may have added multitasking into iOS 4, but it isn’t true multitasking. What if you want something a little more versatile? Or hey, maybe like me, you’re running older hardware which according to Apple “doesn’t support multitasking”, or even an iPad which doesn’t have iOS 4 yet. At any rate, I would highly recommend you check out Backgrounder.

Here’s how to install and configure Backgrounder.
END_OF_DOCUMENT_TOKEN_TO_BE_REPLACED