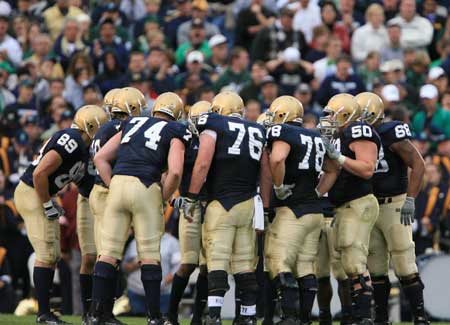 You hear that? Shh, be real quiet. Now you can hear it a bit, and it’s starting to get louder. That’s right, you guessed it, it’s football season boys and girls! We’ve got real life football (I’m sorry, that’d American football to our loyal followers overseas) being played this Sunday as the NFL preseason kicks off with the Hall of Fame game, and the NCAA season starts in 1 month!

We’ve got 5 Mondays until the college season begins on September 2, and the NFL regular season starts 1 week after that, so we’ll take some time to cover the regular ‘preparing for football season’ rundown, beginning with a college football prediction poll.

Phil Steele, who’s known for being one of the most accurate predicting experts of NCAA football, released his Top 25 a couple months ago. One thing to clarify about Steele’s rankings is that this is where he believes teams will end up at the end of the upcoming season, it’s not a preseason poll based on last year’s final standings. If it all goes as he’s selected, we’ll have an undefeated Oklahoma facing an undefeated Nebraska team in the Big 12 title game, the final season with a Big 12 championship game as it stands now, and then moving on to win the National Championship. Pay attention to Notre Dame, a team that made a pretty big jump from last years standings. New Head Coach Brian Kelly will get the most out of those players.

So what do you think? Is he way off base or do expect things to shake out pretty close to that order? Sound off in the comments (so you can get yourself entered into our contest to win an iTunes gift card!). Also, be sure to join us next week for some fantasy football draft help.