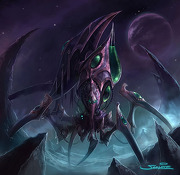 Last time I described a quick build to throw out a bunch of zealots early. That build is very situational, and while effective against newer players it can bite you in higher league play when your opponents become better at countering and mass ranged units. This build is somewhat a continuation of that first build, this time with the goal of adding a few stalkers to your army if the first push falls flat, or beefing up that first attack.

This build will provide you with around 10 stalkers to compliment your Zealots for optimal ranged goodness. The build is very versatile, and it works well against all race match-ups. Terran can counter with heavy Marauders, and Zerg can counter with mass Roaches, but if you run this build correctly they won’t have the numbers to make a difference, and your Zealots should be able to take care of them in short order.

9/10 Pylon
Again, this probe is your scout. Send him to a corner once you find your opponent to start you stealth pylon, or put him on a patrol pattern near your opponent’s choke point to make sure he doesn’t rush you before you rush him.

12/18 Gateway
If I’m going for fast Stalkers I normally still build a couple Zealots to defend against early game harassment. If I’m feeling confident I’ll build 3-4 and send them to do some harassment of my own.

18/26 Cybernetics Core
As soon as your CC comes out start researching Warp Gate, you should save at least two Chrono Boosts for this.

20/26 Gateway
You should have time to build 4 Stalkers before Warp Gate finishes researching. That gives you a standing army of 7-8 to start heading towards your opponent’s base as your Warp Gates come online.

22/26 Gateway
The goal is to have your third gateway finish building right as you finish researching Warp Gates.

So the scenario should come together like this: The 2-3 zealots you built with your first gateway and the 2-4 stalkers you built while you were researching Warp Gates should be heading to your opponent’s base right as you start warping in the first set of stalkers to the pylon you dropped in an inconspicuous corner near the enemy base. That gives you a sizable standing army to surprise your opponent with, and will usually result in a quick GG.

The other, even better scenario involves more timing a lot more luck. If you’re playing a 1v1 map where your opponents location is set, you can try to drop that pylon in your opponent’s base before he starts scouting. If your opponent is any good at this game, this shouldn’t work. There’s a multitude of things you can do to counter it, not the least of which is simply sending a peon on a quick patrol around your base. That said, I’ve pulled this off way more times then I thought I would, so its definitely worth a try. There’s nothing quite like the reaction to seeing 12 stalkers come in from inside your base and start killing peons.