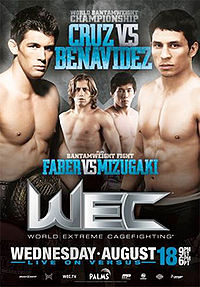 Ahh, the joys of World Extreme Cagefighting, or the WEC as regular people call it. It’s the sister organization of the UFC, focusing on the smaller weight divisions, Lightweight (155 lbs), Featherweight (145 lbs), and Bantamweight (135 lbs). It’s so much fun watching these fights because these guys literally throw each other all over the place. Tomorrow night they hold their 50th event which will air on Versus the biggest (and only) draw being the Bantamweight title fight. This was supposed to be the debut of WEC poster boy Urijah Faber at his new weight class, but he had to pull out recently due to a knee injury. I have to confess, again, I haven’t watched quite as much WEC as I have other organizations, so some of these predictions are a bit off the cuff, or based on only 1 or 2 fights I’ve seen, you’ve been warned.

Before my picks, I’d like to do a quick review. Over the course of the last two months I’ve gone 2-2 in Strikeforce, 4-5 in UFC, and these are my first picks of a WEC card. 6-7? Those are very pedestrian numbers. Take out possibly the biggest upset in MMA history and a card littered with picks from a rooting interest instead of purely picks by the book and those numbers would be a bit better, but that’s just a hollow excuse, I promise to do better. So here’s your picks. I like Cruz to keep his belt, Roller over Pettis, Swanson over Mendes, and Jorgensen over Pickett. Keep your fingers crossed boys and girls.