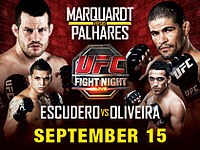 Fight Nights are always a chance for the UFC to offer a fighter a chance to rebound and move up in his division. They’re also a great chance to see some of the up and coming fighters, typically paired against foes to display their skills, or given an equal opponent to see if they have the chutzpah they think they do.

This is a card that offers a little of both. Nate Marquardt was expected to use Chael Sonnen as a jumping off point for a re-match with Anderson Silva. Sonnen instead advanced past Marquardt and nearly took down The Spider on his own. Efrain Escudero and Charles Oliveira are both fighters on their way up in the Lightweight division, and will try to use each other as proof they are ready for bigger names and opponents. Here’s your card with picks after.

I just can’t see Marquardt letting Palhares beat him, so I’m sticking with him. The Escudero and Oliveira match is difficult to pick, but I think I’m leaning slightly toward Efrain to move up the ladder. After that, I’m going with the Millers (no relation) in their respective matches. Don’t forget that the 12th season of The Ultimate Fighter kicks off immediately following the fights.