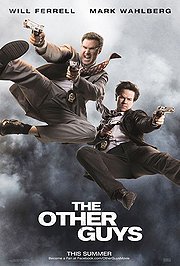 I mentioned last week in my review of The Expendables that my wife had received some free movie passes and we’d planned to use them for that movie but I ended up on a guy’s night instead, you remember that? Well, since we missed that one, we decided instead to use them on The Other Guys because we’d heard so many good reviews of the movie from friends.

I went in with very low expectations because so many of Will Ferrell’s movies have been downright terrible lately. His movies have turned into extended versions of the commercials because all the funny parts fit into the trailer. But the movie was holding onto a high 70s rating on Rotten Tomatoes, which put it ahead of the all-time classic Anchorman, so I had to keep reminding myself to not get too excited for this one. Did it work? Was it any good? What kind of movie review would this be if I didn’t cover that! Join me after the jump to find out.

The laughs in this movie come big and they come often. The cameo roles that Sam Jackson and Dwayne Johnson turn in are hilarious. I’d love to see a feature length movie based on their characters. On top of that, Mark Wahlberg does an outstanding job in his role opposite Will Ferrell’s craziness. The argument they have at the beginning of the movie detailing the strengths of a lion versus a school of tuna is one of the funniest movie arguments I can remember.

I also got a kick out of the scene when Wahlberg’s character meets Ferrell’s wife for the first time. Particularly as he’s leaving… you just have to see it, I couldn’t do it justice. Michael Keaton as the police chief was also a casting stroke of genius. His habit of randomly quoting TLC songs, classic.

There were a few scenes in this movie, like all Ferrell movies, when as I was watching I just thought to myself, “they must have filmed this thinking how funny it would be, but it just turned out as a ‘you had to be there’ moment.” So expect some inconsistency, but also some big laughs from this comedy. It definitely lived up to the hype.

Dave’s Quick Hits: More than delivered on my expectations, Anchorman and Talladega Nights were always my #1 and #2 Will Ferrell movies but I think The Other Guys manages to bump Talladega Nights for 2nd place, a bit uneven at times but very enjoyable, 9 out of 10
Thoughts From The Better Half: I can’t wait to watch this one again it was so funny, Mark Wahlberg looked better than usual in this one and I thought he was really great in this role, 8.5 out of 10
Rotten Tomatoes Score: 76% – While not the best collaboration between Will Ferrell and Adam McKay, The Other Guys delivers bursts of comedy during a summer largely devoid of laughs.