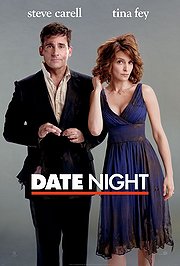 I honestly never really knew anything about Date Night prior to watching it, the only thing I knew was Steve Carell and Tina Fey were starring in a movie together, that alone was enough to make me want to see it. I was of the impression that the movie was about two single people going on the worst date ever, that’s not at all what the movie is about.

Date Night was released in theaters on April 9, 2010 and on DVD and Blu-ray August 10, 2010. While it definitely isn’t anything you haven’t seen before, I think it’s the quality of the actors in the movie helped to make it a fun ride, from the 2 stars down to appearances by Mark Wahlberg and James Franco in a couple of hilarious scenes, Date Night does a good job of delivering the laughs. We’ll get into the movie a bit more after the jump. END_OF_DOCUMENT_TOKEN_TO_BE_REPLACED

We’ll cover the rest of the shenanigans after the jump. END_OF_DOCUMENT_TOKEN_TO_BE_REPLACED

It’s that time of the week again, here’s your entertainment news:

The teaser trailer they showed at Comic-Con for The Avengers is now online, click here to check it out. It’s not much, but you’ve gotta start somewhere.

Zachary Levi addressed those rumors we told you about in the last Entry Level Geek, about him auditioning for the new Superman movie. In a recent interview with IGN he said:

“It’s complete fiction. A bummer that it’s complete fiction!” Levi recounted how he himself began hearing about it. “I start getting these text messages from my friends, saying, ‘What is going on? You didn’t tell us any of this!’ And I’m asking, ‘What are you talking about?’ I get this link emailed to me from my publicist. She goes, ‘Just so you know…’ I go check it out, and of course, on the bottom of that article there’s all these comments, and every other article that spawned off of that and all the comments on those sites.”

“I guess one of the things that I fear is that people pigeonhole me in the nerd role,” Levi told me. “Because a lot them say, ‘Well, I can see him as Clark Kent, but I can’t see me as Supes.'” Levi laughed, adding, “I’m an actor! Just give me six months and a gym. Give me something! I guess one of the upsides is that people are going, ‘I can believe him as Wally West. Make him The Flash! I can believe that!’ Which would be amazing.”

More news along with this week’s New In Theaters after the jump. END_OF_DOCUMENT_TOKEN_TO_BE_REPLACED