I’m crossing into Fred’s territory with this post. After all he is the resident World of Warcraft fanboy, but according to Macenstein, Apple’s latest press conference is going to announce WoW for both the iPhone and iPod touch.

How did he come to this conclusion you might ask? Well, you can read the full story here. But the short and sweet version is that the little slogan Apple sent out as part of the invitation “Mum is no longer the word” is actually an anagram for “Lord, now the Grum is on me”. 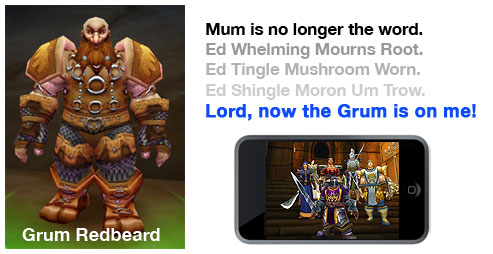 … as everyone knows, Grum Redbeard is a level 55 dwarf located in the Starfall Village barrow den in the contested territory of Winterspring in the World of Warcraft …

I have my doubts that this will prove to be accurate, but hey, for the sake of all you WoW fans (and Blizzards pocket book) I hope it is. But wouldn’t it make more sense to release the long awaited Beatles related announcement in London?

One thought on “WoW on the iPhone?”