Pros: The pretty colors and shapes make it into this port of the indie classic.

Cons: Nearly impossible to play anything but the easiest levels. Lacks the music and polish of the actual game.

Noiz2sa is a Kenta Cho game. If this means nothing to you, you’re not alone. Kenta Cho isn’t exactly a household name for most people. He is a, and prehaps the, premier indie shooter developer. A quick look at his website reveals an extensive library of his games (mostly vertical shooters). From a design standpoint, I like his games. He captures that colorfully eclectic style that seems to be all the rage in Japan, and keeps the gameplay simple and fun.
Why then did I give it a 2 out of 5? Because either by design or by mistake in Lazrhog’s translation this game is impossibly hard to play. No amount of finger sliding can keep me alive for longer then 30 seconds. But I’m getting ahead of myself here. 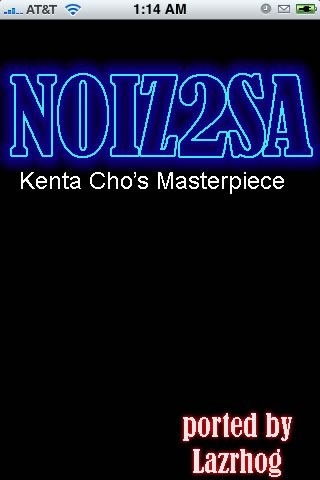 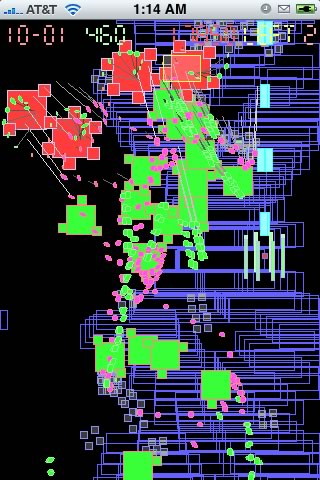 Gameplay in Noiz2sa revolves around shooting brightly colored squares that revolve around bigger squares over a vector graphic cityscape. Shooting them causes them to explode, releasing a small spinning blocks of four grey squares. Collecting these segmented blocks is how you score points and how you stay alive. For every block you collect you get a certain number of points and +10 to your shield to a maximum of 1000. Theoretically, if you could continue to collect blocks faster then you’re getting hit. This theory gets blown to bits almost as fast as you do in this game. Projectiles seem to hit for anywhere between 200-800 points, and in the harder stages its just flat out impossible to stay alive.
Accepted design philosophy would dictate that you should create a game that people want to keep playing. After a few minutes of watching “Game Over” pop up every 30 seconds I was ready to quit and go back to playing Pool. 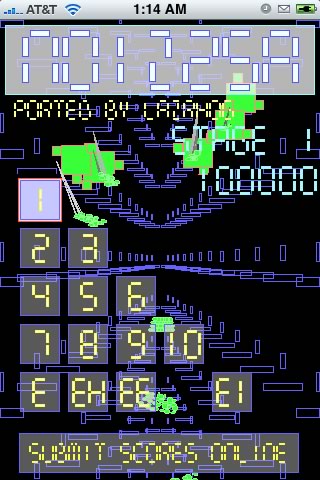 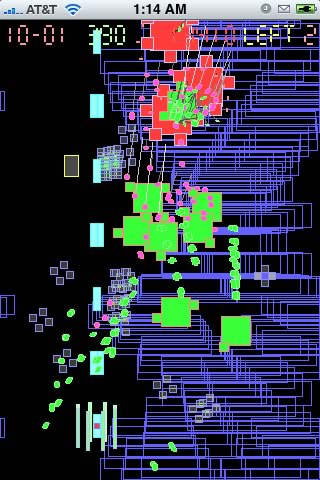 I had a pretty good time playing level 1. I could dodge the projectiles and keep my shields up while enjoying the cool landscape I was flying over. By level 5 it was a lost cause. On the ‘Endless Hard’, ‘Endless Extreme’, ‘Endless Insane’ stages I’m lucky to stay alive 20 seconds.

Out of curiosity I downloaded the actual game from Kenta Cho’s website and played that for the purpose of comparison. I’m glad I did, because it’s definitely not the same game. For one thing, the music is fantastic and adds a lot to the experience (no music in this port). It’s still not easy, but it makes me feel like I’m playing a game and not some LSD junkie’s fantasy gone horribly wrong. I say that to make one thing clear: Noiz2sa is a great indie shooter. This port to the iPhone and the Touch is not.