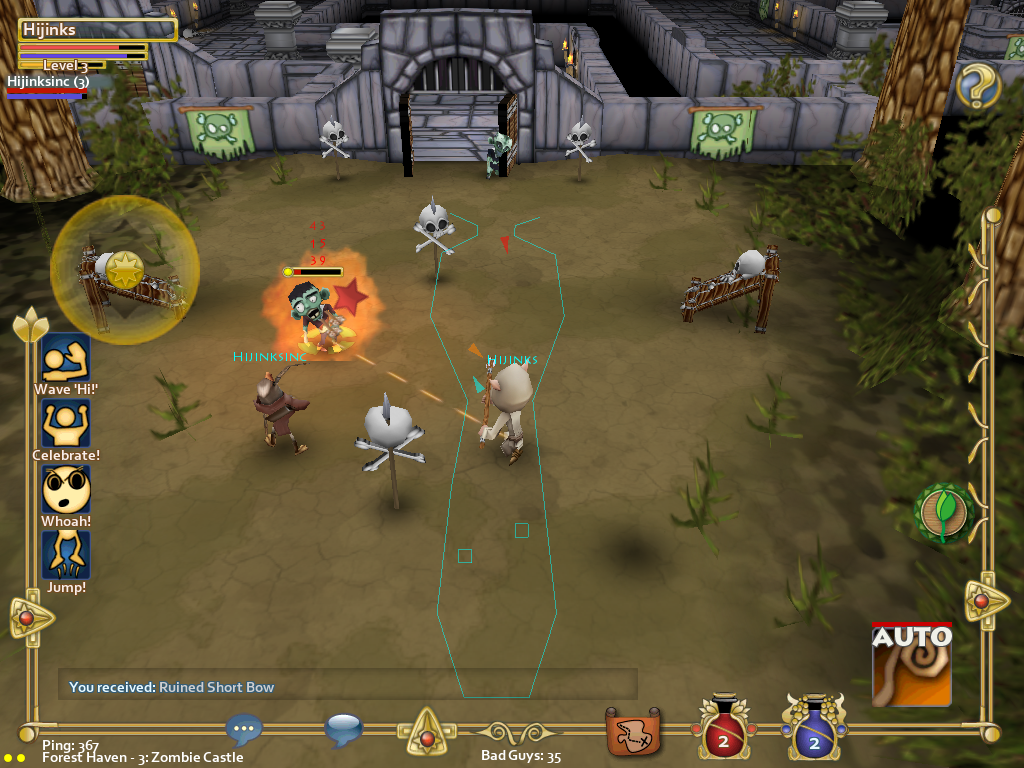 Quick background on me. I started playing EverQuest in 2001. I switched to World of Warcraft in 2004 and have a couple 80s laying dormant right now. I’ve also played Lord of the Rings Online enough to get a max level character, and Eve Online enough to get bored ( 20 minutes). Now that I’ve established myself as a MMO junkie (or whore, in Aaron’s terms), lets begin.

Pocket Legends is a 3D MMORPG for the iPad. Its not menu driven like everything else that calls itself an MMO on the app store, it is an honest-to-goodness massively multiplayer online role playing game. Spacetime Studios is now the Lord British of the iPad and iPhone MMO platform. If we had review scores, that would be plus five, right there. I could wax eloquent about the possibilities the game opens up for hours, but I think it’ll be better for all involved if I shut up and review the game as it stands.

Pocket Legends is not a open world per say. There’s a hub zone (the ‘Towne’) Where all the players on the server can go and socialize (read: spam the chat channel with trade chat). The vendors are in this central hub, as well as a bank where you can stash your spare gear.  The actual fighting takes place in instanced levels that are part of a larger campaign scenario. The free version comes stock with the Forest Haven campaign, in which you rescue three orbs that protect your village from evil (but can be stolen by evil people at any time evidently). The free version is also capped at level 13.  If you want more, you have to pay for it. 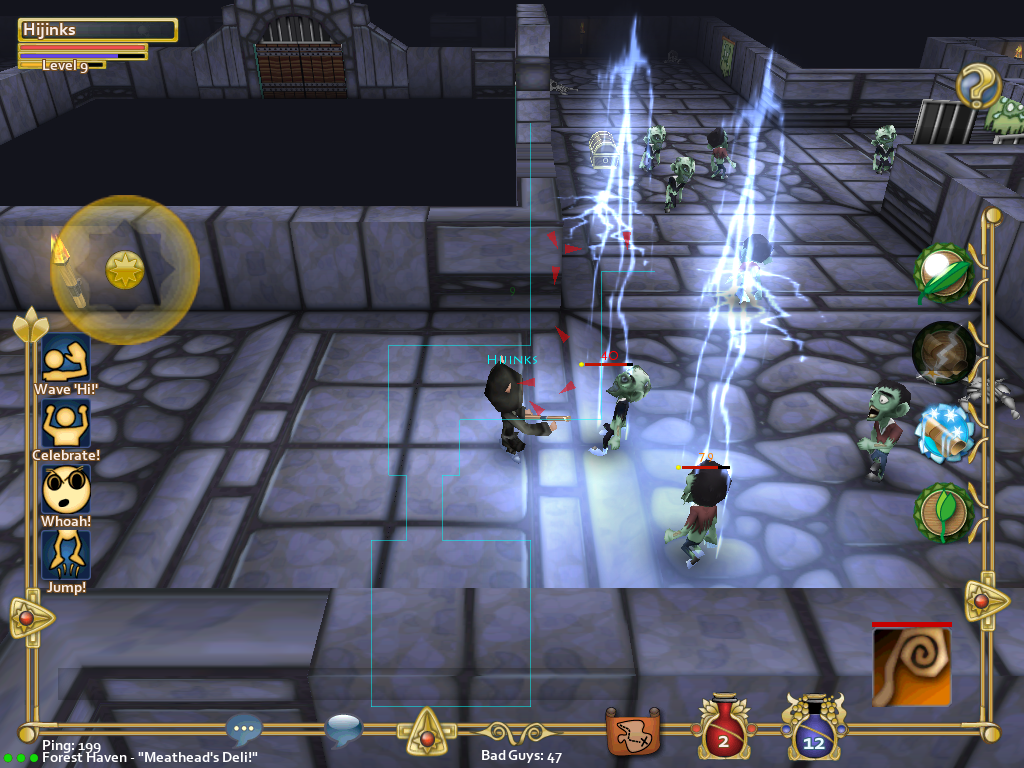 Aaron and I spent quite a bit of time in the game this week, and our first impressions weren’t that great. The game was laggy, repetitive, and frustrating to play with our quickly depleted potion supply and insta-deaths due to the lag. After a while we moved from the coffee shop Wi-Fi/3G to the home network, and the experience got a lot better. Less lag meant fewer deaths, and our Archer/Enchantress combo easily kited the bad guys all over the map. Incidentally, shooting arrows out of your back? Awesome level 1 ability. World of Warcraft should take notes.

Better latency didn’t fix the repetitiveness though. After 30 minutes we both were ready to take a break for a couple days. A lot of it stemmed from the fact that once you burn through your mana pool (about 40 seconds into the game), and drink all your potions (2 minutes into the game), just hitting auto-attack and running around in circles gets really, really, really boring. In my time soloing my Enchantress I found that once I hit a certain point (around level 9) I had enough money flowing in I could set myself up with a endless supply of mana potions. This, coupled with a few more spells to throw around, is making the game much more entertaining to play.

No matter what MMO you play, the first few levels are the most boring. 1-10 normally consists of running around and hitting ‘1’ and ‘2’ on your keyboard for two hours until you level up enough to get some fun abilities. The problem the free version of Pocket Legends has is that the experience of those monotonous starting levels are all it has to offer. Most people are going to play it for half an hour and delete it, because its just not fun until you sink more time into it. That’s a shame, because it has the potential to grow into a full featured experience, especially if the updating strategy thus far is any indication.  When I originally downloaded it for my 1st Gen iPod Touch the ‘Towne’ hub was nothing more then a slightly glorified chat room and the vendor was just another menu layer in your character sheet. Now that I’m playing on my iPad you can trade with other players in town, deposit items in your own personal stash, and buy gear from actual vendors. What’s next? An auction house? We’re excited to find out. Hopefully Spacetime can find a few more hooks to throw into the free version to convince the doubters that paying for premium content is actually worth it.

Who knows? Maybe this will be the mobile MMO we’ve all been waiting for. It’s definitely not quite there yet, but the potential is enough to make us wonder.