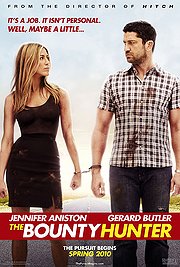 I’m really not sure why I like Gerard Butler so much, outside of 300 I really haven’t cared for many of his movies (although I guess I enjoyed Law Abiding Citizen too). But I definitely haven’t been a huge fan of his romantic comedies. There’s just something about him that makes me want to keep seeing his movies, maybe he just comes across as a regular guy’s guy? Maybe I like his accent? I just really can’t remember what interested me about The Bounty Hunter, whatever the case, I sat down and watched it recently with my wife… maybe she likes his accent?

Watching this movie, I almost get the vibe that the people behind it just couldn’t figure out what they wanted it to be and in the end it almost feels like 2 or 3 movies all squashed together. As Wikipedia states, ‘The story centers on a bounty hunter (Butler) hired to retrieve his ex-wife (Aniston), who has skipped bail.’ This is basically the thread that sorta holds the movie together. Aniston plays a reporter who consistently gives Butler the slip so she can chase a lead on a murder cover-up. This leads them to almost falling back in love with each other, working together in parts of the movie towards a common cause, and of course, realizing what pushed them apart in the first place, and butting heads again. Then at the end, they have to work together if they want to survive and solve the case… wow, I’ve never heard that storyline before! I’ll let you guess if they end up falling back in love at the end of the movie.

Usually I like Jennifer Aniston in the roles she’s picked. But personally, I don’t find Aniston believable as a reporter at all and I don’t ever really feel like these two were actually together in the first place. I liked Aniston better in The Break-Up, she was believable as an art saleswoman and it really felt like her and Vince Vaughn used to be a couple in love, and that they really felt the anger towards each other that they displayed on screen. I never got that vibe from her and Gerard Butler. Butler was alright I guess. Again, he just seems like a real regular guy in most of his ‘non action’ movies, and that’s basically what he was playing, so it worked well enough. Honestly, some of my favorite scenes in this movie had more to do with Jason Sudeikis than either of the stars.

Dave’s Quick Hits: So much of this movie felt forced, Butler and Aniston never really develop any chemistry, you aren’t missing anything, 2 out of 10.
Thoughts From The Better Half: I liked it, it was fun! 2 good looking people to watch which always helps and I love Butler’s accent, 7.5 out of 10
Rotten Tomatoes Score: 7% – Gerard Butler and Jennifer Aniston remain as attractive as ever, but The Bounty Hunter‘s formula script doesn’t know what to do with them — or the audience’s attention.