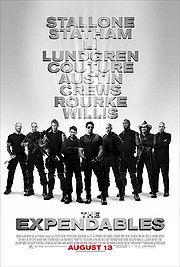 My wife received 2 pairs of free movie passes as a gift from her work awhile back, and I told him immediately after hearing about them that one of the movies we had to go watch was The Expendables. I was really excited about this movie, I mean, look at that list of names on the poster… it had to be awesome, right?

Well, as it ended up, we didn’t use the tickets for this movie, I ended up going on a guy’s night out with my buddy Bob Sacamano because The Expendables was one of the $5 movies for the week. We got to the theater, found the seats closest to the middle of the theater, not too close, and with the requisite one seat buffer between us, we sat in expectation of all the awesomely mind blowing action we were about to see. Were our minds blown? You’ll have to stick with me through the break to find out.

The movie starts out big, you get some good lines and some bad dudes getting blown to smithereens within the first 10 minutes… always a great start to any action movie. But the movie just never seems to really get on track after that. With this great cast of action stars, you expect them all to get their chance to shine. To a small extent that’s true, but I think they could have been utilized much better. The overall movie really comes off as more of an ‘Stallone’ movie than I expected. I mean, Stallone had his hands all over this project from beginning to end. He wrote it, starred in it, and directed it. In the end, it didn’t feel like this epic 2000’s action flick, it felt like an 80’s movie starring 5 Stallones.

I don’t usually notice these types of things about movies, but the lighting and camera angles seemed really bad at times. I think some of them were re-shoots, but it was just a situation where… I don’t know. I guess it felt more like Stallone had a free weekend and decided to call all of his buddies up and filmed them all doing some crazy stuff, and then edited the clips together to make a movie. It all felt so forced, “Ugh, I am man, I blow stuff up because I’m so big and strong! Ugh!”

The other part that felt strange to me was how much this movie centered on Stallone and Statham’s characters. The others were all very background characters… which was fine, I just didn’t expect it. I also found it very strange that Bruce Willis’ name was on the poster and his role was talked about so much, but in the end his cameo was about the same as Ah-nolds. It was a hilarious scene, I just expected him to be in it a bit more.

Let’s be honest though, nobody goes into this movie expecting any award-worthy performances or super dramatic moments. It was a big action scene from beginning to end… I just expected a bit more is all.

Dave’s Quick Hits: I was probably too excited for this movie and thus had expectations too high, didn’t use all the talent it collected very well, some good scenes but should have been better, 7 out of 10.
Thoughts From The Better Half: Guys night out… so she hasn’t seen it yet.
Rotten Tomatoes Score: 40% – It makes good on the old-school action it promises, but given all the talent on display, The Expendables should hit harder.