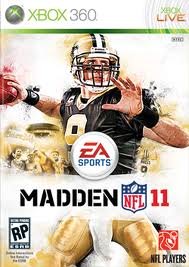 The big changes in this year’s game are four-fold: dual analog stick control, more intuitive blocking, Strategy Pad, and GameFlow. In some cases the upgrades were a home run, some surprised me. I’ll get into the details after the jump.

So the dual analog stick control and more intuitive blocking were essentially the same upgrades that were made in NCAA. They are great for those of us that like to focus on the strong, punishing ground game, and they are executed nearly as well here. So I won’t go into much detail on these features. It should also be noted that the turbo boost has been eliminated, your players instead accelerate at the appropriate moments to hit the hole. At first I didn’t like this change, but it feels much more natural and realistic. In other words, you’ll get used to it.

The other big change that I really expected to hate was the GameFlow. What this is is basically an offensive and defensive coordinator that call plays for you, and tells you what to focus on to make the play successful. Being a coach myself, I expected to shut this off immediately in favor of total control, but it actually is a nice little change. Having plays called for you really makes you feel more like one of the players, and you can focus more on execution instead of strategy. You can shut this feature off if you want, but they made it so easy to switch between GameFlow and manual play calling, you probably won’t have to. After each play you get the option for GameFlow or manual play call, and then the game moves you into whatever mode you chose, quickly and flawlessly.

You can also control the manner in which plays are called in GameFlow. You can set up an entire playbook of calls depending on the situations, and the game will make calls based on your settings. The other benefit of GameFlow is the speed at which you can finish a single game, which is down to about 25-30 minutes.

The Strategy Pad was the last big change, and for offline games, it’s kind of nice to have everything located on 1 button. However, I think the way it’s set up, it could be a bit cumbersome for the online gamers, a bit of the speed of audibles is lost from the old setup. But again, this is a feature that will affect you more based on what style of Madden gamer you happen to be

All in all, I think this is a step up from last years game, which in itself was a great game considering the other recent installments of this series. You’d be able to do alot worse, and it’s a very nice addition to the tremendous NCAA edition for ’11.