Despite my iPad crashing and needing to be restored, I managed to use 18.3GBs of data for the month of September. Bringing my total data usage for the year to 84.3GBs, I’m feeling pretty positive about breaking 100GBs total by the end of the year.

It will be interesting to see if my data usage decreases now that I’m also using the Droid X, which depending on data speeds I will most likely be using to tether to my laptop instead of the iPad.

When the iPhone first launched, a little company called Lima Sky created a monster with Doodle Jump, since then numerous companies have tried to cash in on the “Doodle craze”, very few of them offering much in the way of compelling game play when compared to Doodle Jump. Even fewer mimicking the financial success of Lima Sky.

DoodleGeddon boasts that it’s a “…fast paced missile command style game…”. But is it? Well, sort of. It certainly is a missile command style game, that much is obvious. But the gameplay itself is horrendously slow until about wave 12, then things get a little crazy. While I can see why they choose to ease people into the game, it’d be nice if they offered different levels of difficulty.
END_OF_DOCUMENT_TOKEN_TO_BE_REPLACED

Seems like my data consumption is averaging out a bit, last month I used 22.4GB, this month 27.4 so the mid-20GB range seems to be the sweet spot.

I’d still like to break 40GBs in a month, just to stick to AT&T, but I’m not going out of my way to make that happen.

Remember when the iPad was announced and people said “meh…”? And now, less than a year later, it’s a huge bread winner for Apple. Everyone else appears to be noticing as well, in the past few weeks more and more tablet rumors have popped up with the vast majority of big name players in the industry on board.

While I did go outside the scope of the past few weeks, you get the idea. I’m also probably leaving out a ton of other tablets, like the failed JooJoo tablet for example.

This whole jumping on the tablet bandwagon seems to me to closely resemble when ASUS first launched the Eee PC and the netbook revolution took off, people were a little skeptical at first and then realized it was a great idea. Now I’m not saying tablets will kill off netbooks, but they seem to be the flavor of the month for the foreseeable future. And reportedly the iPad by itself has caused a decline in netbook sales for ASUS.

Bottom line, I love the iPad, but I really am excited to see cheaper (and hopefully better) tablet solutions from companies besides Apple. 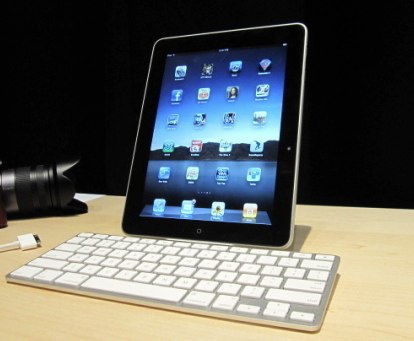 Depending on who you talk to they say it’s entirely reasonable to replace a laptop with an iPad. But is that really the case?

Last week I went out of town for seven days and made the decision not to bring my MacBook Pro, perfect opportunity to put my iPad to the test.

First, I loaded up some additional software for my trip, since most of what I’d need access to would be work related things. The extra few apps I installed were: