When the iPhone first launched, a little company called Lima Sky created a monster with Doodle Jump, since then numerous companies have tried to cash in on the “Doodle craze”, very few of them offering much in the way of compelling game play when compared to Doodle Jump. Even fewer mimicking the financial success of Lima Sky.

DoodleGeddon boasts that it’s a “…fast paced missile command style game…”. But is it? Well, sort of. It certainly is a missile command style game, that much is obvious. But the gameplay itself is horrendously slow until about wave 12, then things get a little crazy. While I can see why they choose to ease people into the game, it’d be nice if they offered different levels of difficulty.

The gameplay itself is pretty straight forward, you start out building one missile silo and as the game progresses you’re allowed to build a new silo every two waves or so. Intercepting asteroids is done simply by tapping on them to launch a missile, larger ones naturally break into multiple smaller asteroids requiring more firepower to destroy completely. 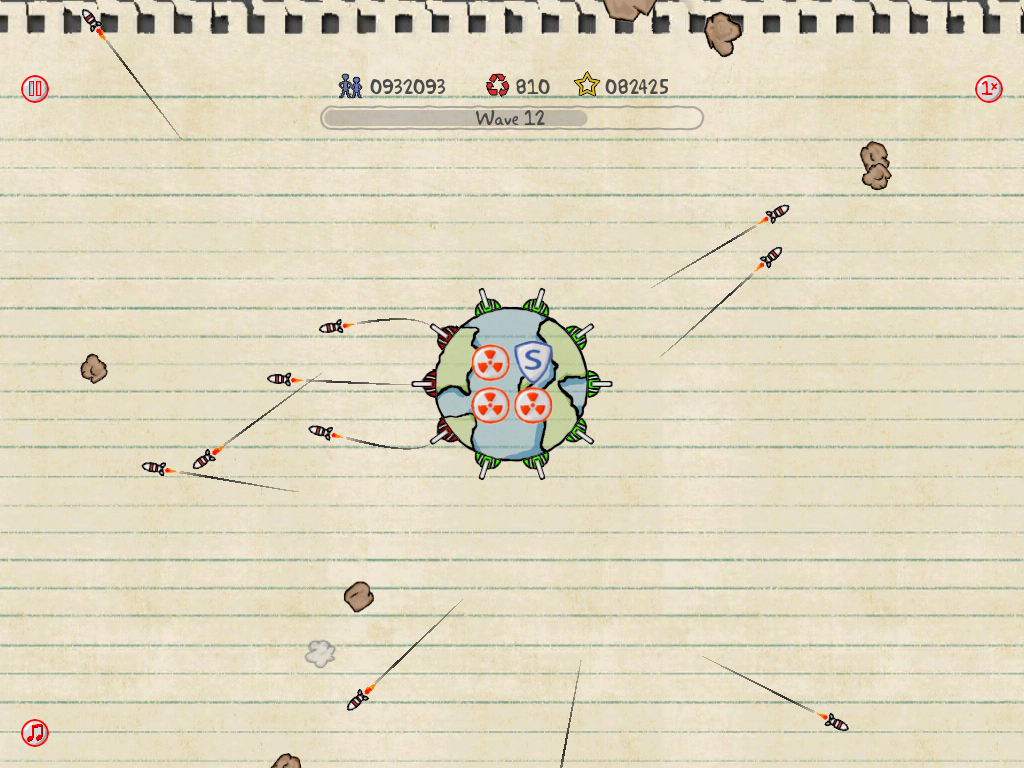 If an asteroid hits Earth it of course kills tens of thousand of people. Hit zero and you lose, makes sense. The population of earth, seemingly oblivious to their impending death (or perhaps because of it), continue to breed like rabbits, giving you a pretty good chance at redeeming yourself even if you let a few asteroids slip through your defenses. But is it enough to make it through Wave 30 and save the world? Apparently not for me.

You can also score yourself some sweet power-ups by shooting UFOs (which gives you a disrupt cannon) and satellites (shields) out of space, you’re limited to a cache of four power-ups at any given time (which are displayed as an overlay on Earth). To use a power-up, just tap it.

Things the game has going for it? Aside from decent, albeit a little repetitive gameplay. Whimsical doodle graphics that are well drawn, not overly detailed, but fitting for the sub-genre of game that Lima Sky has spawned. As well as the ability to play your own music from within the game, they’ve even added in game controls for switching tracks, pausing, etc.

For a $1.99 can you really say no? Well yes, you could, but for an iPad game that has some solid potential it really is a fair price.