Here are some instructions for installing NES games on your iPod touch or iPhone. These will best benefit you if you already have a jailbroken iPod or iPhone and a wireless network.

Updated: 1-15-2008
First step: Assuming you’re running the 1.1.1 firmware you can use http://jailbreakme.com to jailbreak your iPod.

Second step: Use Installer.app to download the NES emulator

Third step: Download the NES ROM you want to install

Fourth step: Determine the IP address of your iPod touch, the easiest way to do this is tap Settings, then hit Wi-Fi.

You’ll see a similar screen to this 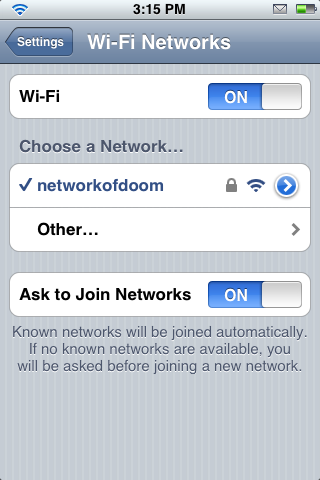 Tap on the blue arrow next to the wireless network you’re connected to, you should see something like this: 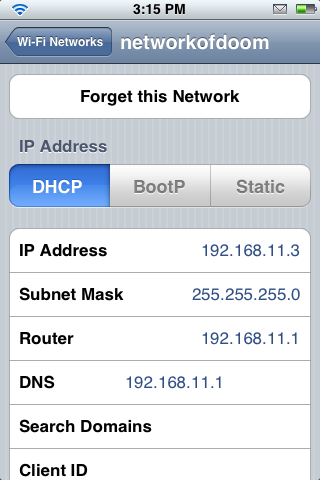 Write down what it says under IP address, you’ll use that in the next step

For Windows users (I promise a more detailed version of this with screen shots is coming):

Configure it with the following settings:
Server: The IP of your iPod touch
Username: root
Password: alpine

Navigate to the following directory: /var/root/Media

Create a folder named ROMs (if it doesn’t already exist)

Open the ROMs folder and create a folder named NES

Upload your NES ROM file to this directory

In the server box, enter the IP of your iPod touch (should be what you wrote down in the last step)

Enter root for the username
Enter alpine for the password

Then under More Options enter the following into the Path field: /var/root/Media

Then hit Connect! (Make sure your iPod is on and connected to your network prior to clicking Connect)

If you don’t see a folder named ROMs listed, you’ll need to create one, just right-click and hit New Folder and name it ROMs.

Then open up the ROMs folder and create another folder named NES.

Now open up the NES folder and copy your ROM file(s) there.

6 thoughts on “Installing NES games on your iPod touch”