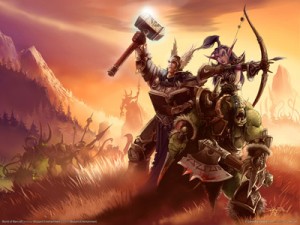 Next to my computer desk sits a pile of games and gaming systems. A veritable cornucopia of electronic entertainment. Of the two dozen or so games in the pile, I’ve played five or six at the most. Pile of shame indeed. Nestled in a database on a server farm somewhere near Irvine, California sits the reason these games and consoles lay neglected on my floor. A level 80 Blood Elf Paladin, a 80 Orc Warlock, and a laundry list of other characters. For those of you not MMO inclined, I’m talking about Blizzard’s 11.4 million strong cash machine: World of Warcraft.

My situation isn’t unique. World of Warcraft’s domination of the gaming space has been the object of countless articles from many writers better qualified then I. What caught my interest is exactly why I choose to play WoW when I have so many great games just waiting to be enjoyed. What magical power does this game possess that continues to interest me after almost five years of playing it? And maybe even more importantly, how can the video game industry reach out to gamers like me and motivate me to buy their products?

I created my first serious character in the summer of 2005 with the idea of playing with the creators and fans of a couple webcomics I enjoyed. Four years later, that character still exists along with all the others I created on that server. Four years later, I can still play with the same group of people I met when I started. That’s the first reason I keep playing. What motivation to I have to sink my time into another game that won’t reward me after the credits roll? The second reason stems from a wonderfully devious facet of MMO design. The more time you invest into a MMO, the more value you place on that experience and the less likely you will be to leave it another game. Last I checked I have spent somewhere in the neighborhood of one hundred days in World of Warcraft since I started in 2005; I’ll let you do the math.

So what does a game company do to draw in a gamer like me? I mean, I’m a hopeless case right? Wrong. One word: Co-op. No, not the show, I’m talking about cooperative gameplay itself. I realized that the only games I play outside of WoW anymore are games that allow me to sit down on my couch with a buddy and enjoy a shared experience. Then it becomes more focused on the interaction between me and my friends rather then the time I’m investing in a game that could be spent doing other things.

As an aside, it’s that mindset that makes a game like Army of Two fun. Yeah I know, the game is terrible, I wouldn’t play it by myself if you paid me. Strangely though, when you’re hanging out with a friend and you’re both cracking up at how stupid the dialogue is while blowing heads off terrorists and fist bumping–the experience becomes something more then the game design provides–it becomes fun. It taps into the whole reason MMOs are successful. They create an environment where people can go beyond the inherent game design (quest, kill, level up, get loot) to create something far bigger, and far more enjoyable.

Are you a game designer trying to figure out how to make a game a MMO addict would play? Make it cooperative. Throw in some quests while you’re at it. Maybe even a experience system. Or are you like me: a MMO player suffering from some severe gamer guilt? Do yourself a favor. Go buy Left 4 Dead (1 or 2) and find a couple friends to play some Survivor Mode with you. You’ll have the time of your life, and you won’t even think about what you could be doing in WoW with the time you’re spending. You can thank me later.