As I sit down to write this review, I realize that I don’t seem to know much about these movies before I sit down to watch them… it’s really been a recurring theme in all my reviews. Hopefully my New In Theaters section of Saturday Shenanigans will help me to better understand what these movies are about on a week to week basis!

The only thing I really knew about Kick-Ass was that it was about a kid that dresses up like a superhero and fights crime, it was based on a graphic novel, and that it received pretty good reviews. I didn’t even realize Nicolas Cage was in this movie, that alone is typically a deal breaker (as was the case with , Knowing, Bangkok Dangerous, Next, I could go on but is that really necessary?) unless there’s something else that really draws me to the movie, like National Treasure 2 (I enjoyed the 1st one) or Eva Mendes in Ghost Rider. That’s another terrible movie and I can’t stand Nic Cage in it, but Mendes just looks so good in that movie…

*Clearing my throat* Wow, sorry for that rabbit trail there. We’re here to talk about Kick-Ass, not Nic Cage (but I have to say, he wasn’t too bad in this movie!) Released on April 16, 2010 and on DVD and Blu-Ray on August 3, 2010, Kick-Ass is based on the comic book of the same name by Mark Millar and the film was directed by Matthew Vaughn. I’ll get into my reason for listing these details after the break.

The first thing that I really enjoyed about this movie was the style director Matthew Vaughn chose to use. It was very Kill Bill-esque. The biggest reason this was appealing to me is because Vaughn has been brought on to direct the upcoming X-Men: First Class movie, a film I wasn’t too interested in, but if he can make it anything like this movie, sign me up!

Another thing I found interesting was the success of this movie spawning a sequel… of the comic book it was based on! Director Vaughn said, “No, we’re not [planning a sequel]. If it continues doing well, then we might but I just don’t like counting my chickens before the eggs hatched.” And on March 16, 2010, Mark Millar said he would begin writing a sequel comic book in April, a sequel that would involve criminals taking on supervillain personae to counter the superheroes, and Hit-Girl trying to lead a normal life. The universe this story is based in is realistic, no super-powers or anything like that… which is what makes it so fun.

So after all that, let’s get to my thoughts on the actual movie, plot summary via Wikipedia. (SPOILER ALERT – Skip past the ‘END OF SPOILERS’ tag to avoid any spoilers) The story centers around our main character Dave Lizewski (Aaron Johnson) is a geeky teenager who wonders why nobody has ever decided to become a superhero like the ones in the comic books, so he decides to become a real-life superhero, despite having no superpowers or training. His first attempt at crime fighting goes poorly and ends with him beaten and stabbed, and hit by a car to boot, ending up in the hospital with damaged nerve endings, giving him an enhanced capacity to endure pain, and metal plates are placed in his skeleton to support his bones. 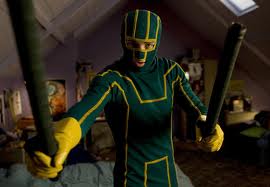 However, his second attempt to fight crime is captured on a cell phone video and hits YouTube bringing him instant fame and many MySpace followers (Myspace? Really? Do people even still use that?). In an attempt to help the girl he has a crush on, he steps up to an attempt to take down a drug dealer, and is saved by Hit-Girl and her father, the mysterious Big Daddy. We begin to learn how these two became superheroes, and that Big Daddy is attempting to take down the local mob boss, Frank D’Amico, and his entire organization.

After D’Amico kills an imposter dressed as Kick-Ass, his nerdy son, Chris (Christopher Mintz-Plasse), suggests a different approach. Chris will pose as a superhero named Red Mist to trick Kick-Ass into trusting him, and lead him into a trap. Red Mist meets Kick-Ass, bringing him to D’Amico’s warehouse to “ambush” his men. Instead, they find the building on fire with everyone inside dead. Red Mist retrieves surveillance footage which shows that Big Daddy is responsible.

Realizing the enormity of this superhero lifestyle, Dave decides to quit being Kick-Ass and focus on the girl of his dreams, which has since become his girlfriend. Red Mist again tricks Dave into taking him to Big Daddy’s hideout, where D’Amico’s men take Big Daddy and Kick-Ass hostage. They attempt to kill both superheros while broadcasting it on the internet to ‘teach everyone a lesson’ and end up killing Big Daddy. Hit-Girl intervenes before they are able to kill Kick-Ass and then the two of them regroup and… of course, kill all the bad guys. 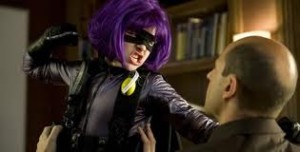 Hit-Girl and Kick-Ass retire from crime fighting to live a more normal life. Mindy, now in the custody of Damon’s ex-partner Sergeant Marcus Williams, enrolls at Dave’s school. Dave explains a new wave of superheroes have been inspired by his endeavor. In the final shot, Red Mist, having taken over his father’s business, dons a new mask and declares war on the new hero population quoting the Joker, “as a great man once said, ‘Wait’ll they get a load of me'”.

As pointed out on Wikipedia, the movie stays true to the adult nature of the comic series by featuring a large amount of profanity and graphic violence. The original comic book contained considerably more graphic gore and realistic violence; in the movie, most scenes are toned down by the adding of lighthearted background music and are less graphic in the gunshots and amputations scenes. Also, the torturing scene for Kick-ass and Big Daddy’s death are considerably longer, more detailed, violent and cruel in the comic book than in their film counterparts. The characters in the comic book are also younger than in the film. (END OF SPOILERS)

Regarding the violent and graphic nature of the movie, there was alot of controversy about the language used, particularly by the 11 year old Chloë Moretz, who played Hit-Girl. Christopher Mintz-Plasse expressed surprise that people were angry about the language, but did not seem to be offended that Hit-Girl murders many people. Typical. Yeah, there was a lot of language and graphic violence in this movie, but if you don’t like it, don’t watch it. This is not a kids movie, it’s rated ‘R’ for a reason.

Dave’s Quick Hits: Another movie I really didn’t know much about prior to sitting down to watch it, really enjoyed it not kung-fu but really reminded me of Kill Bill, not for kids but very enjoyable for adults, 8 out of 10.
Thoughts From The Better Half: Not at all what I thought it would be, I thought it was a kids movie and it most definitely is not, I liked the visual effects they used, too bloody and gory but it was a fun movie, 6 out of 10.
Rotten Tomatoes Score: 76% – Not for the faint of heart, Kick-Ass takes the comic adaptation genre to new levels of visual style, bloody violence, and gleeful profanity.