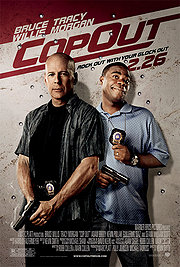 Cop Out is a homage to all the buddy cop movies out there. Homage, which Tracy Morgan’s character points out early in the movie, is a french word for “You’d better let me do this!” He was referring to interrogating a witness, during which he proceeded to poorly imitate a number of cop movies.

This is a good example of what this movie ultimately achieves. Great dialogue followed by a scene that just missed the mark. If the entire movie could have been Willis and Morgan driving around arguing, it probably would have been better. We’ll hit the specifics and some plot details after the break.

Cop Out was released in theaters February 26, 2010 and on DVD and Blu-Ray on July 20, 2010. The main plot revolves around two longtime NYPD partners (portrayed by Willis and Morgan) on the trail of a stolen, rare, mint-condition baseball card who find themselves up against a merciless, memorabilia-obsessed violent gangster. This is the first film that Smith directed, but did not write the screenplay.

Looking back, I guess I enjoyed this movie about as much as any of Smith’s other work. His films are typically filled with vulgarities and a few good laughs. This one isn’t nearly as bad as some of his other stuff language-wise, due to him not actually writing it perhaps? I’m not really sure Tracy Morgan is top billing material. The only times he makes me laugh is when his crazy, over the top antics accent the stuff already happening, like he does on 30 Rock. He really can’t carry a movie. Bruce Willis… I’m not really sure what he saw in this movie, he probably just enjoyed working with Kevin Smith and wanted another chance to do that. If they had cast a lesser actor, or another comedy-type like Morgan, I wouldn’t have paid any attention to this movie at all, so I guess it’s a good thing they got him. Seann William Scott also shows up and creates some laughs, he’s always funny as a sidekick… he knows what he can and can’t do and he’s fit into his niche nicely.

Dave’s Quick Hits: I got tricked into thinking this movie had some promise, I really should have known better, but it’s fun with a few good laughs along the way, 6 out of 10.
Thoughts From The Better Half: I thought it was funny, they were surprisingly good together and played off of each other pretty well, just an OK movie though, 5 out of 10
Rotten Tomatoes Score: 19% – Cop Out is a cliched buddy action/comedy that suffers from stale gags and slack pacing.

One thought on “Hijinks Movie Reviews: Cop Out”