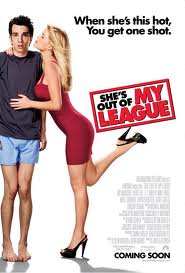 Confession time, well, 2 things really. One, I rented She’s Out Of My League because Alice Eve is looks really good on the cover. Two, I have a very honest relationship with my wife, and I love it. While watching the movie, after the first few scenes Alice Eve was in, my wife turned to me and said, “She’s really cute! Is she on your list?” More on that list later.

I didn’t really intend to watch this movie until a friend of mine told me how much he enjoyed it. This particular friend is very conservative in his movie watching and it surprised me that he’d chosen this movie to watch… I’d written it off as just another raunch-fest that so many teen/college age movies seem to be these days. So when I sat down to watch She’s Out Of My League, I really wasn’t sure what to expect.

It turned out to be a pretty good romantic comedy. There was one character, ‘Stainer’, that was responsible for probably 95% of the profane vulgarity in this movie, and much of it felt very forced, almost like the makers of this movie felt all of that stuff had to be in it to make it funny. In most cases, I laughed hardest at the scenes with Nate Torrence, you might recognize him as Lloyd from Get Smart, as he played the eternal optimist who was obsessed with Disney movies and true love. He played the only married guy in the group and so he always talked about love and girls from a different viewpoint that the others, and always used Disney movies to illustrate his points. He was also involved in a particular scene about… umm… grooming… that was so hilariously awkward, my wife and I both were laughing out loud.

She’s Out Of My League had the regular high points and low points that come with every romantic comedy, and the funny parts were a little hit and miss, but there were definitely one or two scenes that really got me laughing, which is about all you can really expect from a rom-com. It’s not groundbreaking by any means, it’s the same formula you’ve seen a thousand times, but I think it was executed pretty well. Oh, and about that list I mentioned earlier. My friends and I (and our wives) made a top 10 list awhile back of the hottest celebrities during a road trip, and it’s something my wife and I have maintained ever since. We’ve even created a few lists over on Listal.com, so it’s always funny talking about it, people don’t typically know what to think. And yes, if Alice Eve looks this good in another movie or two, she’ll make her way onto my list.

Dave’s Quick Hits: I would have liked the movie a lot more if the ‘Stainer’ character wasn’t in it, or if he at least was less vulgar, but it had a few really funny moments, can you ever go wrong with a movie about a beautiful girl?, 6 out of 10
Thoughts From The Better Half: I had no expectations for this movie but it really surprised me, the married guy with an obsession with Disney movies was my favorite part, definitely not a kids movie, 5.5 out of 10
Rotten Tomatoes Score: 57% – She’s Out of My League has moments of humor and insight, but it’s bogged down by excessive vulgarity and cartoonishness.

One thought on “Hijinks Movie Reviews: She’s Out Of My League”