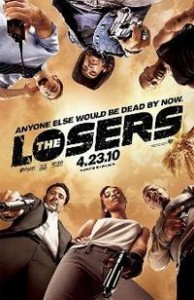 The summer of 2010 brought us two ragtag military team movies. Movie A: “A group of Iraq War veterans looks to clear their name with the U.S. military, who suspect the four men of committing a crime for which they were framed.” and Movie B: “After being betrayed and left for dead, members of a CIA black ops team root out those who targeted them for assassination.”

Movie B happened to be The Losers, Movie A was The A-Team. While I’ve heard good things about The A-Team, I haven’t seen that one yet. The Losers theatrical release date was jockeyed around a bit, but ended up being April 23, 2010, and July 20, 2010 was it’s DVD and Blu-Ray release. We’ll get into it a bit more, with possible spoilers, after the break.

The Losers wasn’t anything new. Based on the Vertigo comic book series of the same name by Andy Diggle, it was your typical action movie. The movie starts in the Bolivian jungle, with the crew on a search and destroy mission. After targeting the location, they see kids being brought into the area and try to cancel the attack. They find that ‘Max’ the man who called for this mission, intends to see the attack through to the end so they infiltrate the camp, against orders, to get the kids out. After narrowly escaping, the reach the pickup location and instead to send the kids on the helicopter to safety. After watching the helicopter take off, they hear Max call for an attack on the helicopter, believing them to be in it, and watch as the wreckage falls to the ground. Believed to be dead, the team is stranded in Bolivia and vows to seek revenge against Max.

It’s at this point that we meet Zoe Saldana’s character, Aisha, who is also after Max, and she knows how to help them get to Max and exact their revenge. Let me just state here that Ms. Saldana is gorgeous in this movie, as usual. She seems to be getting bigger movies (perhaps not always better, but bigger nonetheless) and that’s good news for everybody.

Anyway, the rest of the movie is spent setting up this counter-attack and the attack itself. In the end, Max gets away (as the big bad guy almost always does in comic books) setting up the chance for a sequel or two. I don’t really think The Losers did anything to set itself apart from a lot of other action movies out there, but they certainly could have done much worse and faded into the background like so many other action movies. I’d definitely be interested in a sequel if they decide to venture that direction, they’ve got the story all set now and I think it could be a fun movie or two… although it might be difficult getting Chris Evans again, now that he’s signed a 9 movie contract to be Captain America, and he was one of my favorite parts of this group.

Whatever the case, there’s plenty of movies out there that are far worse than The Losers that you could waste your time with, just sit back and enjoy the ride.

Dave’s Quick Hits: I was fairly excited for this movie and wasn’t too disappointed, it’s your standard action flick, lots of explosions and gun fights but it’s got plenty of humor too, 7 out of 10.
Thoughts From The Better Half: I enjoyed this movie although I had a hard time staying interested in parts, I got a kick out of Chris Evan’s character, 5 out of 10
Rotten Tomatoes Score: 47% – The Losers is loud, fast, and unrelentingly violent — but it’s also funny and well-acted, which will make all the difference for some action fans.

One thought on “Hijinks Movie Reviews: The Losers”