Everyone is entitled to their own favorite smartphone, but I think we all can agree that some phones just do certain things better. Today, let’s take a quick look at how various mobile browsers fair in the Acid3 test.

Default browsers for the platforms: 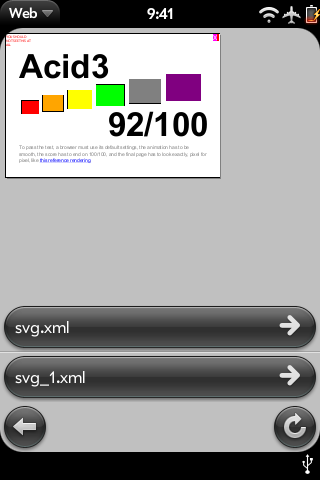 91/100
Wait… the performance of the browser actually went down with a new build of the OS? 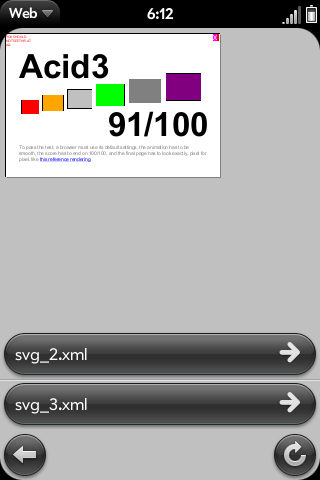 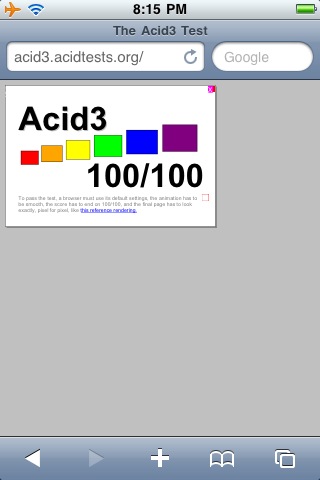 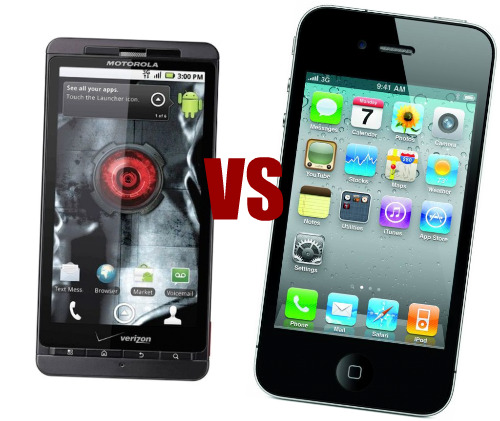 This series offers a comparison of the iPhone vs. Android experience.

First, a little back story. I’ve owned several iPhones over the years, but all the while have kept a cheapo Alltel/Verizon phone with which to make actual phone calls. And while AT&T has improved the data network quite a bit over the years, I’m ready to move onto something more reliable. That and consolidate to just one phone.

Naturally, since Palm/HP and its webOS has handsets made for midgets and Blackberry’s are about as user-friendly as a porcupine, I decided to go with Android, specifically the Droid X. Over the next few weeks I plan on chronicling the process of switching from iOS to Android.

iPhone
This part of my experience might be rather skewed, as I never bought an iPhone anywhere near launch. Never waited in line, even for an hour or two, in fact my first iPhone was mailed to be almost 6 months after they were originally released.

That said, the one time I did acquire an iPhone in a retail environment, it was actually rather pleasant. Three months after the iPhone 3G was released I decided on a whim, to go pick one up for work, I pulled into the local mall, walked into the AT&T store and then approached one of the six employees aimlessly wandering around the store and asked for an iPhone. Moments later one was brought from the back, and I walked to the counter to active it. A few simple questions, and I was all ready to go, and out the door. Total time spent: 15 minutes.

Droid X
Admittedly the odds were not in Verizon’s favor when I walked into the store to purchase my Droid X. Even though I fully expected to have them mail the actual handset to me, I was making the trip anyway because I needed to move my current phone from Alltel to Verizon, as well as add my phone to my wife’s Verizon account since she gets a lovely discount for being an employee of the local hospital.

I cleverly planned my appointment to coincide with the commencement of tailgating for the football game that afternoon, in hopes that there would be fewer people on the store. It kind of worked, I only had to sit around for 20 minutes.

After my “short” wait, I got my new phone ordered in about five minutes. One guy told me it’d take seven days to get the phone, another staff member said just two days. I wasn’t able to move my account over until the new phone arrived however, since my old phone was an Alltel handset.

In the mean time I was left dreaming of my new toy, suddenly my iPhone seemed sluggish and bulky, even though the Droid X dwarfs the iPhone.

Actual time for the phone to arrive? Four days.

Thankfully it arrived earlier enough in the day for me to head back to the Verizon store. After a  two minute wait, they moved my account and activated my phone in about ten minutes. Much faster.

The victor?
I’m going to call this one a tie, since if I’d ever bought an iPhone this close to launch there would’ve been some extra waiting involved.

Yes, the Parrot AR Drone is finally shipping! And we of course couldn’t pass up using Hijinks Inc. as an excuse to test out the AR Drone ourselves (since we’re not cool enough to go to CES). Our ceremonial unboxing pictures can be found here.

In case you’re unfamiliar with how the AR Drone works, it broadcasts a wireless signal (802.11 b/g) and you connect your iDevice to it via WiFi. Basically just an ad-hoc wireless network. In our tests we had problems switching between multiple devices, our iPhone connected/disconnected fine, but when we went to try it out with an iPad we couldn’t lease an IP. Un-pairing the drone didn’t help, nor did restarting it entirely. Hard coding an IP address on the iPad also yielding no results.
END_OF_DOCUMENT_TOKEN_TO_BE_REPLACED 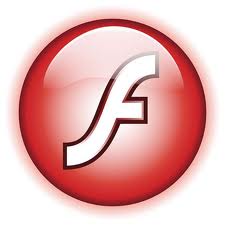 Despite Steve’s best efforts to murder Flash it still lives on, and maybe you’re one of those people who really wants Flash on your iDevice. Well, you’re in luck! Hacker extraordinaire, comex, has some up with a little something called Frash, which promises to bring Flash playback to your iDevice.

Previously you had to install Frash by compiling the .deb file yourself, but someone made a.deb and has added it to a Cydia Repo.

Note: This version of Frash will not work on the iPhone 3G. It should work fine for iPhone 4, iPhone 3GS and iPad.

Warning: This is an alpha piece of software which is being updated with bug fixes regularly, installing from this repo does not guarentee you’ll recieve updated versions of Frash. To follow the development of Frash and compile the latest and greatest version yourself, check out comex’s GitHub page for it.

Here’s how to install Frash on your device:
END_OF_DOCUMENT_TOKEN_TO_BE_REPLACED

Apple has released iOS 4.0.2 for iPhone/iPod touch and iOS 3.2.2 for iPad to patch the PDF exploit that JailbreakMe.com has been using in their current browser based jailbreak. Meaning that if you’re planning on jailbreaking anytime soon, don’t upgrade your iDevice past 4.0.1 or else you’ll be sunk.

Never fear though, if you failed at using commonsense and have already upgraded, the jailbreaking community is hard at work on a new jailbreak for 4.0.2, although it’s likely this one will end up being a tethered jailbreak (in other words it will require a computer in order to jailbreak your iDevice).