On a side note, since I last wrote a post we have a new writer (welcome Ryan), and DAVE started posting again. If this isn’t a sign from God I need to start posting more, I don’t know what is.

Last week I picked up a Nintendo Wii from eBay on the cheap. With the Xbox 360 I bought last year, and the Playstation 3 I purchased earlier this year, I now own all the current consoles. To put this achievement in perspective, I’m now the coolest guy my 15 year old self could have imagined I would ever be. There is certainly something to be said for being able to switch between playing the Wii, 360, and PS3 with the push of a button on my TV remote. I don’t even have to leave my couch. It offers a kind of fulfillment I don’t imagine my girlfriend will ever understand.

The reality I’m choosing to ignore by buying all these things is the fact that between working 40-50 hours a week and trying to spend time with people in the RL, I’ll never have time to justify my purchase. My current solution is to sacrifice sleep to play. I wouldn’t call it a viable long term solution, but on the bright side, Final Fantasy XIII’s story almost makes sense at 3 o’clock in the morning. END_OF_DOCUMENT_TOKEN_TO_BE_REPLACED 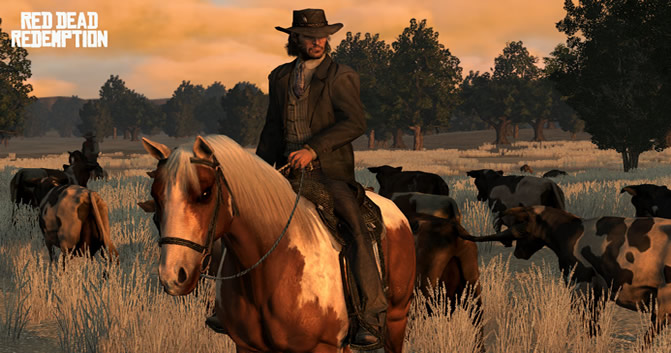 Red Dead Redemption is Rockstar’s new (I say new layered heavily in italicized sarcasm because the game was actually released way back on May 18th) open ended, Western themed action adventure game that was released to raving reviews from just about everybody. This is the part where you say, ‘Hey, Rockstar, I recognize that name, didn’t they make the Grand Theft Auto games? I love killing prostitutes and running policemen over in stolen cars!’, but before you get all gung-ho about the mayhem you can create in the wild wild west, let me help you by more accurately describing what you can expect after the jump.

END_OF_DOCUMENT_TOKEN_TO_BE_REPLACED

*Edit2: Don’t have internet on your console? Here’s a guide to using a flash drive to get the rosters.

First quick thing I’ll throw out there is for you guys who are anticipating the upcoming release of NCAA Football 11. If you don’t know what to do until July 13, try out the new Teambuilder site. EA hasn’t made any sort of official announcement about this new site, and it has been glitching up quite a bit for just about everyone who’s been trying it, but feel free to poke around. You can at least look at the new roster rankings for the upcoming season.

To see the new roster rankings, after you register on the site (if you haven’t already) just create a new team and click on the far right button ‘Roster’. Here you can select any base roster for your team. Once the team is loaded you can look through and see everyone’s ratings on your favorite team. I’ll be sure to post again if they make some sort of official announcement or change the location of the page. Quick, go try it out and kill a couple hours…

Here’s a tutorial for Teambuilder, released by EA Sports:

Alright, I finally pulled myself away from Halo 3 long enough to give you a few quick blurbs for a review. The game definitely pulled through in a few areas, but I actually think they could have done better in a few others.

More after the jump.

END_OF_DOCUMENT_TOKEN_TO_BE_REPLACED

I really didn’t know much about Bioshock when it came out. I’d seen the commercial and glanced at a couple of previews, but that was pretty much it (I knew so little about the game, I thought you played as the dude on the front cover, with the auger hand). I downloaded and played the demo on Xbox Live and was intrigued. Then, after I read a couple of reviews that gave it a 9.9 and a perfect 10, I figured I needed to give it a try. After playing it for awhile, I have 2 words to say “Holy crap!”