In lieu of any meaningful content to present, I’ve finally decided to break my posting trend with something completely pointless: Commentary on video games!

First off, it’s not 3D Diablo. Honest. Even if it’s made by the same guys who developed Diablo 2, and you’re using exotic weapons to kill all manner of hell-spawned demons and undead, it’s not D2. Why? Well…we’re really not sure, but it’s not. Truth be told, while it may be unfair to compare the two games, the comparison is inevitable as the Patriots winning the Super Bowl this year. And unfortunately for Bill Roper and the gang, the game doesn’t come close to the polish of the original. It could, and at times you think it does, but you never get the feeling of belonging to the world you’re playing in.

I got hooked into (not onto) the game after listening to an interview of Bill Roper by the guys over at the 1Up Yours podcast; I came away really excited about the game, and started watching trailers and reading previews like a Flagship fanboy. Thing is, After dropping fifty bucks and spending twenty-thirty hours playing it, I’m not really feeling the quality of “this is awesome” that I expected to. I came into the experience really really wanting to like it, and that managed to carry me through the first week or so of playing it, but now I’m not feeling the urge to pick it back up at all.

Let’s get down to specifics.

The graphics? Pretty, but the dark and dank does get a little old after a while. I guess I can’t expect anything else from a game set in post-apocalyptic London though.

Gameplay? Fun, especially the evoker and marksman classes. My main is a guardian, mostly because it’s the easiest to play and hardest to die when lag strikes. Which brings me to the first of my big concerns. I don’t know if it’s the servers or if it’s because I’m playing the game over a DSL connection, but the lag is ALWAYS horrendous. Usually anywhere from a 1-15 second delay between my mouse-click in real-time and the response in the game. This might have gotten fixed in the past week that I haven’t been playing, but I doubt it. I honestly haven’t even tried to play a different class any farther then the first five levels online because I know I’ll do nothing but die in the later levels if there’s any lag in the game. Guardians do better when surrounded, evokers? Not so much.

Second big concern: no skill reset. In a game where skills make up EVERYTHING about your character, the lack of a reset button is nothing short of freakin’ ridiculous. If I have to pay 10,000 pallidum to do it, sure. Whatever. Just get that feature in the game and live as soon as possible. Especially in a new game when you really have no idea how all the skills work together in actual gameplay, its just stupid to expect players to put 50-70 hours leveling a character to fifty just to try out ONE set of skills. Please Flagship, please Bill Roper, do the smart thing.

The other thing people are complaining about is the lack of subscriber content. Since I’m not a subscriber and don’t plan to be, that really doesn’t concern me. My only hope is that the game will be patched to it’s full potential before too long. Because dang it, I need something to keep me occupied until Starcraft 2 comes out.

END_OF_DOCUMENT_TOKEN_TO_BE_REPLACED

After using Mint.com for a few weeks, it certainly has grown on me. So I thought I’d give another go at reviewing it, now that I’ve spent more than a few hours using Mint.

Anyhow, they recently made some changes to their site (Build ph363.43), I have mixed feelings about the update. On one hand, I was excited to see that I could manually enter the APY for my accounts! 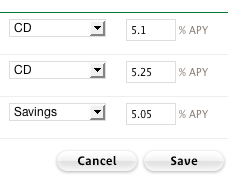 However, my inner obsessive self was disappointed to see that the Update button for manually updating my accounts was gone… 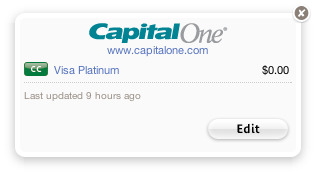 There used to be a nice Update button right there next to the Edit button, Mint! What have you done?!
Edit: The answer is here!

Minor things I know, but here’s the big kicker. Stability, Mint has gone a little janky since the update, now when I delete one entry from my alerts it hides all of them until I refresh the page, then they come back. Also, the email and mobile alerts I have set up haven’t been working 80% of the time, I might get the email update, but not the mobile one… or I may get it three days after I get the email. Rather annoying.

The Spending at the Pump feature on the Accounts page also seems to omit random trips to the gas station, one day it told me I’d spent $124 on gas, and the next it said $83. The truth is I’d spent like $113 for the month.

Then there’s the Spending Trends page, which random display little to no information , here’s what it told me my expenses were for the entire month of November: 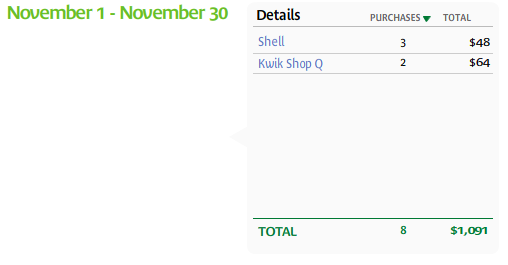 Clearly, $48 + $64 do not equal $1,091. On top of that, I know I had more than 8 transactions for the month, that and I spent well over the claimed $1,091, after all I spent $948 at Newegg.com alone. The Spending Trends feature was working prior to the update, so hopefully they’ll get that fixed soon.

I’m still waiting with baited breath for them to start supporting brokerage accounts, I don’t even know if this is a planned feature, but if they ever add it I will be ecstatic. In fact, I might even do a little dance.

Another feature I’d really like to see soon is the ability to import/export transaction records. But I complained about that in my last review as well, so I’ll shut up now.

The topic you’re looking for has moved.

Since October I’ve been trying to cheat the system and get something for nothing, in this case, a little extra income without any work.

My total passive income for October was $63.19, not too shabby for just getting started. Here are the numbers for November.

Bringing my total passive income for November to $88.56, that an increase of $25.37 over October, and brings the total earnings since the beginning of this project to $151.75.

My main dividend stock just dropped their dividend payout to 10 cents per share for the next three months, which stinks, but I expected it.